This week was all about coming and goings… and the zoo!

Comings
This week started with the arrival of some more volunteers, which means I’m no longer the new guy.

Australian couple, Ani and Bill, joined us on Monday – they’re backpacking for a few months and decided to offer their services for a week after seeing an Up Close advert in their hostel in La Paz. I think it’s an amazing way to break up a long trip and experience something other than the typical tourist spots.

The next day, Constança arrived from Coimbra in Portugal (via Madrid and Miami), but it wasn’t all plane sailing. Given the delays and the fact that her luggage didn’t arrive for more than 48 hours, Constança dealt with everything amazingly well – including the altitude, time difference and being thrown straight into working at the schools!

Having more volunteers will open up extra projects, but for this week it just lightened the load and gave me a couple of sessions off.

I was only in the Children’s Centre once this week; helping in the kitchen for the fifth time out of six. The nursery was happy to welcome the new recruits and they were happy to pitch in by helping the Tías in they classrooms and Maxima in the kitchen.

The Albergue, on the other hand, is not a place for any more comings/goings than necessary, so Ani and Bill didn’t join us here in the afternoons (as they are only volunteering for one week).

On Tuesday and Thursday, the niñas and niños painted their volcanoes (which were mostly unrecognisable from the ones they made the previous week, because we took them home and fixed/re-made them over the weekend!) Next week, we’ll hopefully be getting them to erupt!

On Wednesday, we attempted to play dodgeball with all the children, but there were just too many rules to make it work. They were all excited that there were muchas pelotas to play with, but it was chaos. Much more successful was the netball-type game we played next, because there was only one rule – you can’t move with the ball. It’s a more inclusive game here than football because you have to keep passing and involving other people (with a wide age range and a mixed group, the older boys tend to just keep the football).

At Porvenir, we volunteered as a five for the first time and had two pretty relaxed sessions (the Saturday session was cancelled due to a public holiday that nobody seemed to know about in advance). The skipping ropes were popular this week, even with one of the grandmas!

Away from the volunteering

My Wednesday morning off coincided with Megan and Dane’s, so we made an early start to go to the Valle de la Luna. There was a sort of other-worldly feel about the landscape, but the 45 minute circuit was plenty of time to see everything. 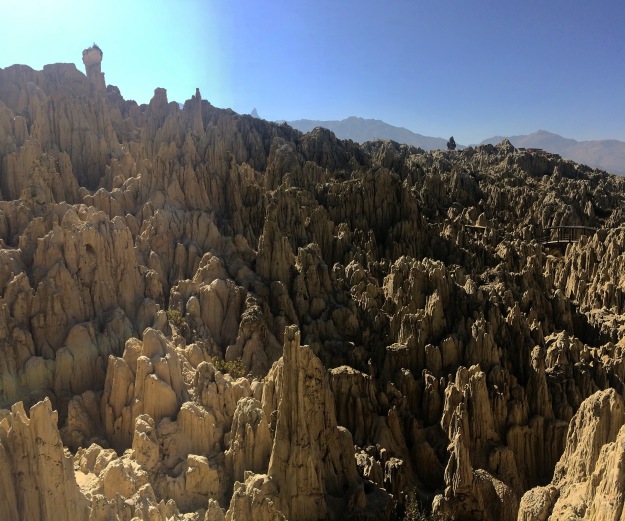 Afterwards we went to the zoo in Mallasa and I was pleasantly surprised. A lot of the animals have been rescued and are there to be rehabilitated, meaning they don’t always look their best, but the conditions seemed quite good. Their headline animal is the puma and from what I saw it isn’t short on food.

There are a lot of animals and we whiled away a couple of hours there – the monkeys were my favourite (obviously) and we got pretty close to the condors.

With Saturday’s session at Porvenir cancelled, the four other volunteers decided they wanted to go to the zoo, so I went along for the second time in four days (it only costs 5Bs or 50p). Laura had also been before and showed us to a few parts of the zoo I had missed on Wednesday.

This included the alpacas and vicuñas – the latter seemed to take a liking to us and one charged across the enclosure straight away. Two minutes later when all seemed calm, it jumped again and Laura managed to take this action shot!

I had a Spanish lesson on my other morning off – it was with a new teacher (new in both senses of the word), so he had to start by gauging my level again and he seemed pleased with what I could do. I enjoyed the way he used different media to teach, with a couple of short videos to watch (including a Toy Story Short and The Butterfly Circus).

On Thursday, all the volunteers and work-aways got together for a meal, and Laura did really well cooking for eight for the first time. It was nice to get everyone together as we’re all usually busy and spread out across three houses. We had burritos, Megan provided chocolate cake (having perfected her altitude baking) and then we played some games, like Uno!

Sunday was the last day for the four Australians – Megan and Dane from the campsite and Ani and Bill as volunteers – so we marked the occasion by going bowling. It might have been my suggestion but everyone seemed to have a really good time; it was new and different for most people!

Afterwards, we ate in the MegaCentre food court and then went to The Dubliner for some happy hour Guinness! It was a good end to another good the week, although it was sad to say goodbye to some new friends.